Marijuana for Recreational Use on Ballot in November? 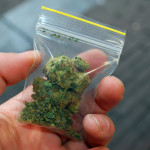 The Arizona Republic recently reported that a campaign to legalize marijuana for recreational use in Arizona is near the 150,642 signatures needed to qualify for the November 2016 ballot.

Under the proposed act, adults 21 and older could possess up to one ounce of marijuana and grow up to six plants in their home without obtaining a license. The plants would need to be in a secure area. The act also would create a distribution system where licensed businesses could grow and sell marijuana.

Keep in mind that this is proposed legislation, not the current law.

For now, marijuana is only legal in Arizona for medicinal use. The Arizona Medical Marijuana Act (AMMA, ARS 36-2801) was passed in 2010 and is operated by the Arizona Department of Health Services (ADHS).

AMMA states that qualifying patients who have registered with ADHS with the proper forms and application fees are given a medical marijuana registry identification card. Those with a current, valid medical marijuana ID can then purchase and possess up to 2.5 ounces of marijuana every two weeks.

If you are an Arizona resident and use cannabis for medical purposes with a valid ID card and have been arrested or are being investigated for a marijuana drug crime, call 480-331-7568 and schedule a consultation today. My job as a marijuana attorney is to see that the law is upheld and that you do not face a wrongful conviction. My free, no obligation consultation is your first step to defending your constitutional rights.